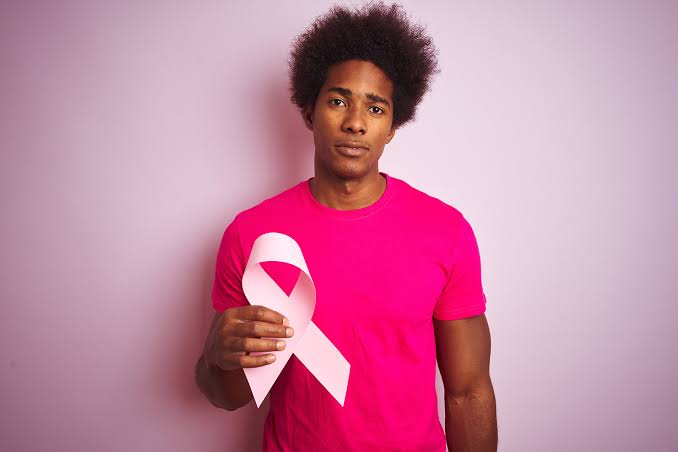 Most people believe that breast cancer is a woman’s problem. Or don’t you? Have you ever stopped to think of a man with breast cancer?

We know. However, breast cancer also affects men. This is exactly what happened to Jide, a 65-year old businessman. In the past, Jide had always struggled with his weight and was even treated for prostate cancer in his 40s. Not long after he turned 60, he noticed a strange swelling on his right chest while bathing. As expected, Jide ignored this sign. Months later, he discovered bloodstains on his singlet after a long day at work.

At this point, he knew he had to go to the hospital.

Eventually, after a bunch of tests, his doctors made a diagnosis of breast cancer.

Sadly, this isn’t just Jide’s story. This story is shared by millions of men around the world; the sad story of breast cancer in men.

In this article, we’d walk you through the basics of breast cancer in males; what it is, how it forms, and how to treat it.

It’s pretty much the same as the females’­­- okay, almost.

The major difference is that the male breast doesn’t undergo a lot of changes during puberty. This way, it is not as developed or fat-containing as the female breast. Although medical studies show that the male breast also enlarges at puberty, this growth is fleeting and regresses after a while.

The normal male breast is flat with a really obvious chest muscle (especially for men who love to hit the gym). In addition, it contains a considerable amount of fat, an areola, and a nipple. However, it lacks the structures that make the female breast primed for breastfeeding- the lobules.

In plain terms, a cancer is an abnormal growth of any tissue in the body. Therefore, breast cancer simply means a cancer in the breast.

Although cancer cells may form in any part of the body, these cells are called breast cancer cells when they develop in the breast of a male or female.

How Common is Male Breast Cancer?

What Causes Breast Cancer in Men?

As it is with many other cancers, the cause of male breast cancer remains largely unknown. However, some risk factors have been identified. An interplay of one or more of the following factors may lead to breast cancer in males:

People like Jide who may have had to use estrogen drugs are at risk of developing breast cancer.

The fat cells in the body convert androgens into estrogens. This is responsible for the increase in the level of estrogen in obese people

Medical conditions that affect the testicles may also predispose a man to breast cancer. This is because the rate of testosterone production drops relative to estrogen production in men with testicular problems.

Radiation is a major risk factor for many cancers, including breast cancer.

In cases of liver damage, the body loses its ability to regulate the level of estrogen production. Sadly, this can also cause breast cancer.

Of course, having a family member with a history of breast cancer is also a major risk factor for contracting the condition.

What Are the Signs and Symptoms?

Now that we’ve discussed the risk factors. Let’s consider the signs and symptoms of breast cancer in males. These include:

What to Do Next

If you notice any of the symptoms mentioned above, please contact your doctor. This way, he/she would conduct the tests necessary to make a proper diagnosis.

Depending on the severity, one of the following treatment options would be considered:

Finally, it is important to note that early diagnosis is a key step in managing male breast cancer. This way, the best treatment plan is identified and initiated ASAP.

Thankfully, with the right combination of drugs and other medical procedures, breast cancer can be managed and men like Jide can live healthy and fulfilling lives.

We're going all out to raise awareness about breast cancer this month. Join us.